This is one of the first reflections on the future of Independent Kabylia’s Economy. Many more are to come that will include how to setup the institutions to build a vibrant economy  that works for the Kabyle people.

“The major thesis of Acemoglu and Robinson is that economic prosperity depends above all on the inclusiveness of economic and political institutions. Only a functioning democratic and pluralistic state which guarantees the rule of law is able to exploit the ideas and talents, which are spread among the whole population of a nation.”

Kabylia is heading towards its independence and lot of questions are being asked mostly about the future of its economy.
Over decades, the Kabyle economy has been destroyed by the anarchy put in place by the French government in pre-1962 era and now by Algerian régime. Kabylia is faced with a challenge to rebuild everything and this will require enormous resources. The independent Kabylia will face significant amount of challenges to build a modern nation and an economy that works for people.

After careful analysis, … this does not seem impossible after all.

The Kabyle people are visionaries and their successful Kabyle economy will likely be knowledge-based economy characterized by innovation, entrepreneurship, excellence in education and a world-class infrastructural backbone.
Kabylia is an innovative and open society that aspires to develop sustainable human capacity, social and economic prosperity for a knowledge-based economy.

Among many initiatives, there is one important and key element of modern development that jump start the economic development. It is the attraction of Foreign Direct Investments. By developing the country’s infrastructure; facilities, factories, telecommunications, and distribution routes can be built to make the country’s resources more accessible and usable to attract FDI (foreign direct investment).
By bringing FDI into the country, foreign companies can invest in local workers, can help train and educate the local labour force and hire them. Thus creating employment and bringing in more money into the country’s economy.

The questions remain how newly independent Kabylia can go from the current status to elaborated economy. To this end, Kabylia must know what it has, what it lacks and what it needs.

This article is the first of many reflections for independent Kabylia development.
Today, we will look into what Kabylia has currently as natural resources and entrepreneurship.

We compiled a non exhaustive list of resources that are currently exploited in Kabylia that can serve as the first source of revenue. This is only a small list, many other sectors such as tourism, other agricultural products, water and electricity productions are omitted due to the lack of data.

in Algeria and nearly a fourth, 87000 were created in Kabylia despite the sabotage economic policies put in place by the regime. The total number was deducted by adding the number of companies created in the wilayas of Tizi-Wezu, Bejaia, Boumerdes, Bouira, Setif, Bordj Bou-Arraridj and Jijel.

The independent Kabylia shall provide the frame of innovation. We believed that educational success and entrepreneurial growth are the key pathways to helping individuals achieve economic independence. To this end, Kabylia must cultivate innovative research networks, reservoirs of private capital and a legal framework that allows entrepreneurs to compete on the merit of their ideas.

Metal resources
The table below shows the Algeria’s minerals where some of them come from Kabylia’s region. Kabylia’s exports are highlighted in yellow.

Cork Production
Kabylia is one of the largest producer of Cork (liege) in the world. The Yakuren forest provide 6% of the world production of cork as show by this table below[1].

The Cork production in 2015 was around 20 Metric Tons. 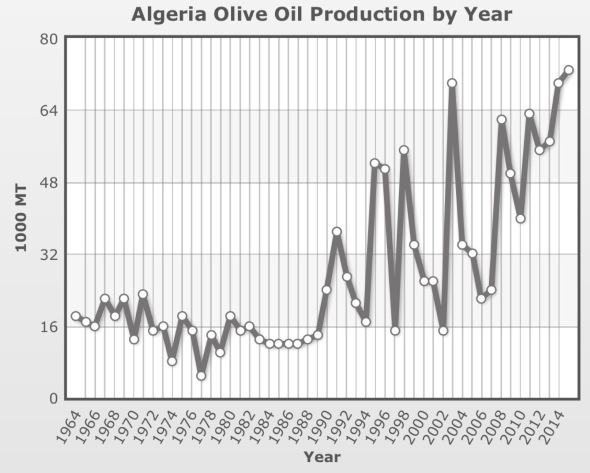 We have used the Index Mundi [5] to get the current prices of commodities on the world market  to calculate the potential revenue for the resources listed below. This revenue may represent a minimum GDP that the new Kabyle government may have to develop Kabylia.

The current revenue from police oil, cork, minerals and finishing amount to over 7 billion dollars.