Don’t be fooled by “Invidisible Algeria”

These last few weeks, the Algerian regime in panic has put the pressure to use the Kabyles of service for saving Algeria and justify the destruction of Kabylia.
This campaign is organized directly from the offices of the presidency. The center of operations gave a reprieve to secret service agents to destroy all those who are fighting to restore their freedom by resorting to arbitrary arrests, torture, threats and intimidations.

The last American report on Human Rights has highlighted the use of torture, arbitrary arrests and detentions in total impunity of the perpetrators of crimes.
The Algerian government is under pressure in order to respect the right of its peoples and more particularly the right of the people of Kabylia.

The Algerian government has been protected by France but the social networks have made this protection difficult. Any crime is visible on the Internet and France does not want to be recognized as responsible for the genocide, and the black cast of Algiers fears international prosecution.

France has created Algeria in 1839 as stipulated in the attached decree of the Ministry of war at that time. 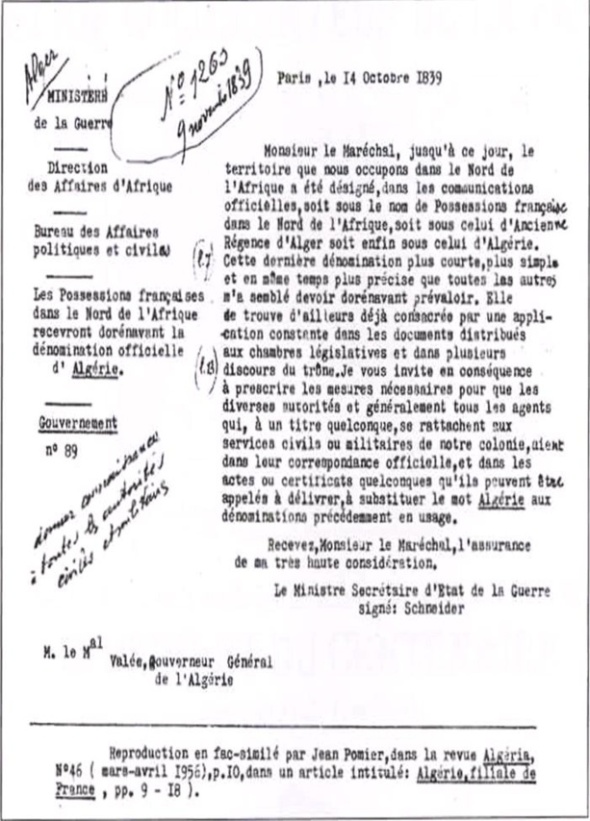 From 1885 to 1916, France and Great Britain drew artificial borders in Africa and have created arbitrary boundaries to serve their respective interests for centuries to come. After the independence of these countries, Charles de Gaulle created the Françafrique cell which depended exclusively of the President and was independent of the Department of Foreign Affairs. It was originally under the direction of Jacques Foccart. This organization operates in the shadow, its role is to maintain the systems of the former French colonies to safeguard the interests of France.

To this day, France continues to maintain secret and ambiguous relationships with the African dictators, its actions are summarized in the maintenance of these regimes to serve the French interests, money laundering, illegal financing of french political parties, coup d’Etats and assassinations.

During the revolution of Tunisia, the Minister of Defense (Michèle Alliot Marie) asked the French Assembly to send special forces to Tunisia to oppress in the blood the demonstrators in order to protect the men that France placed in power.

Algeria has been created by France in 1839. After the independence, France has put managers to govern it at its service. To name only one example, since the arrival of Bouteflika, more than 50 billion euros were stolen, laundered and invested in France.

Today, France continues to maintain Algeria under its influence to safeguard its interests by appointing its presidents and its ministers in exchange of apartments and other goods in France. Last week, Khaled Nezar was sent to France to sell the come back of the generals to the French. Our source close to the matter said that the general Tewfic might be getting  his power back and is winning multiple battles.

The Algerian government supported and protected by France cares little for the well-being its people. It is at the service of France.

The generation of 1954, at the image of Hocine Ait Ahmed, has fought for a change by the democratic path but this mode of governance, not respected by the current leaders and France has shown its limits and has not worked.

The African peoples may regain the peace, freedom, justice and prosperity only if they separate themselves from the current manufactured artificial borders to build their nations based on their values, customs, traditions and defend their own interests.
Kabylia in particular will not reach its full cultural, social and economic welfare as long as it is be part of Algeria.
Today, the people of Kabylia lead a peaceful fight for self-determination to live free in their values of freedom, justice, solidarity and prosperty.

Where is the nif !!! Boycott these artists »
« French Dangerous Liaisons

Kabyle Prime Minister will be in Philadelphia, PA on Dec 3rd

Kabylia is coming to Washington DC.

American and Kabyles for Liberty (AKAL) is happy to announce that it is planning some activities for 2017 that include conferences with Kabyle leaders, exhibitions and concerts.